Tanjong Katong MRT station (TE25) is an underground mass rapid transit station that would be operating along Thomson-East Coast line in the future. It was first announced during 15 August 2014 with the station name of “Amber”. However, it was later named as “Tanjong Katong MRT station as it was located underneath Tanjong Katong Road South at the junction between Meyer Road and Amber road. It is also around the vicinity of the Chinese Swimming Club and Big Splash across East Coast Park.

Tanjong Katong station adopts a three access points with two platforms in a stacked side platform design, with both platforms used for trains traveling in either direction, due to limited land space arising from buildings and infrastructure.

The station is estimated to complete and opened in the Year 2023. With Tanjong Katong MRT station, it will bring rail connectivity to condominiums and landed houses around Meyer and Amber Road. Residents of Amber Park and those along the East Coast can look forward to time-savings in their daily journey to the city area (CBD) or the northern areas of Singapore as seven more stations were added to the TEL from Tanjong Rhu to Bayshore.

With Thomson-East Coast Line, a Republic Polytechnic student who lives near Parkway Parade or East Coast Park can arrive home after an hour’s ride, 20 minutes faster than the current journey. 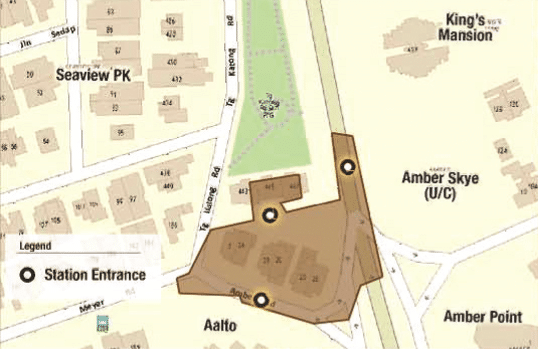